Campbell River is a small community located on the north-east coast of Vancouver Island. Traditionally residents have gained their livelihoods from the extraction and processing of natural resources; fishing, logging and mining formed the backbone of the economy, providing jobs and a municipal tax base.

Campbell River has long suffered the boom and bust cycles typical of a resource dependent economy. The city’s history, growth and decline have been written by these cycles, while economic confidence and activity have been dictated by a few major employers, principally the mill to the north of town, which was most recently owned and operated by Catalyst Paper, but which changed hands a number of times over the past 25 years before finally shutting down in 2009. Between 2008 and 2011, Campbell River lost 1500 jobs in the forestry sector alone,1 representing approximately 10% of the total labour force.2 In July 2011 the unemployment rate was reported at 8.1%, three percentage points above the provincial average3 and the rate of EI claimants per capita was roughly double the provincial average.4 With the closure of the mill, the City of Campbell River lost $5 million in tax revenue, or roughly 10% of the City’s annual budget.5 This depressed economic climate has informed, and continues to influence, the City’s approach to sustainability and climate change action.

Spurred by Federal and Provincial regulation (notably, provincial climate change policy), and a growing acknowledgement of the importance of sustainability planning, Campbell River struck a path towards developing a more environmentally, economically and socially sustainable community. In 2009, Campbell River hired a Sustainability Manager and created a Sustainability Department tasked with incorporating a sustainability perspective throughout the local government organization, administering sustainability projects in the community and supporting or leading a number of integrated planning initiatives. Over the course of two years a suite of six plans was developed by staff and adopted by council.

Campbell River has developed and adopted:

These plans articulate a vision of Campbell River that is more economically diverse, where the natural environment is protected and enhanced and where community connections are supported. There is a high degree of cross referencing and complementarity among all six of these plans, something that staff at the City of Campbell River explained would have been much harder to achieve had the processes not been concurrent.

The Sustainable Official Community Plan (SOCP) is Campbell River’s highest level plan and sets forth land-use guidelines for the municipality. The SOCP is distinguished from previous comprehensive planning initiatives in Campbell River in so far as it uses a 25-50 year time horizon and incorporates a sustainability model, recognizing that “the economy and human society are dependent on healthy, functioning ecosystems.”6 As mandated by the provincial government in the B.C. Green Communities Act (Bill 27), the SOCP includes greenhouse gas emissions reductions targets and outlines land uses that support these targets. It also includes policy to support community connections, social equity, economic development and diversification, and compact, complete communities.

The Sustainable Campbell River Framework is the municipality’s Integrated Community Sustainability Plan (ICSP). It provides the monitoring and evaluation framework for the SOCP.

Both the Agriculture Plan and the Master Transportation Plan expand on policy areas covered in the SOCP. They provide additional context in their respective subject areas and articulate further strategic direction and concrete actions to support development in line with the broader community vision of the SOCP.

Simultaneous to these planning exercises, Campbell River has undertaken a series of building retrofits and fleet alterations with the objective of reducing energy consumption (both electricity and fossil fuels), thus reducing costs and GHG emissions associated with corporate functions. Major building retrofits were completed on the three civic buildings (the Sportsplex, the Enterprise Centre and City Hall) and the City has acquired seven hybrid vehicles and one electric forklift since 2010. It is anticipated that an additional seven hybrids will be purchased in 2013.

As of October 2012, plans had only been adopted by council in the preceding year and it was thus difficult to evaluate the success of implementation. However, there are lessons to be learned from the process and approach that the City of Campbell River has undertaken to move towards sustainability, detailed below. Moreover, the City can report success on the energy consumption front, having reduced its corporate GHG emissions by 12.5% since 2008 and reducing energy consumption in individual municipal buildings by up to 25%.9 See below for further details.

Campbell River’s approach to sustainable development has been in part reactive to a depressed local economy and the need to both diversify the economic base and reduce municipal expenditures on energy. The SOCP, the Agriculture Plan, and the CEEP all cite economic efficiency and/or diversification as key rationale. The approach has also been informed by a provincial regulatory environment that has encouraged communities to take action to mitigate climate change. The Sustainable Official Community Plan and the Integrated Community Sustainability Plan take a holistic view of sustainability, considering economic, social, environmental and cultural dimensions while other plans and initiatives target more specific aspects of urban development such as agriculture and transportation.

During the research for this case study, informants pointed to three critical success factors: the creation of a Sustainability Department, the creation of new external funding opportunities and provincial leadership.

Moreover, staff cited the aforementioned financial incentive programs and grants as critical factors in taking action to mitigate climate change. Indeed some interviewees expressed the opinion that without external funding, climate change mitigation projects would not proceed. BC Hydro,10 the Community Works Fund,11 and the Green Municipal Fund12 were identified as important funding sources for climate action in particular.

The third critical success factor often cited by interviewees was the leadership of the provincial government. Interestingly, the Climate Action Charter, a voluntary municipal commitment, was the most often cited example of a provincial regulatory environment that supported climate change action, whereas legislation such as BC’s Carbon Tax13 and Bill 27 Local Government (Green Communities) Statutes Amendment Act14 (the Green Communities Act), were noted as influential but not as politically galvanizing. This raises an interesting question around the effectiveness of voluntary approaches that rally political will, versus the power of legislation.

Despite the value that informants placed on public engagement and participatory process, they still face challenges in terms of public perception and community buy-in. They have faced a high degree of cynicism in the community with regards to some of the climate change mitigation initiatives they have undertaken. For example a vocal minority has criticized the green roof installed on City Hall as ‘a waste of money,’ despite the fact that this project was fully funded by external sources. This indicates a lack of understanding among members of the public which could potentially be addressed through further engagement.16 Furthermore, staff operates under a political regime that is not consistent in its commitment to the SOCP. Politicians who adopted the plan in February 2012 have since spoken against what they perceive to be excessive regulation.

Below is a table that outlines the costs associated with developing the six plans and the major funders.

*Figures do not include staff time.

In the area of facilities and operations, Campbell River has acquired 7 hybrid vehicles (10% of the municipal fleet) to replace aging traditional fleet stock. The replacement vehicles came at no cost to the municipality as they were completely funded by the Community Works Fund. This represents a capital savings of $286,000 (money that would have otherwise been spent on vehicles with gas or diesel only engines).

Additionally, Campbell River has completed a series of facility upgrades in the areas of heating and cooling, and lighting. The principle funding sources for this work are BC Hydro and the Community Works Fund. Below is a chart of completed projects: 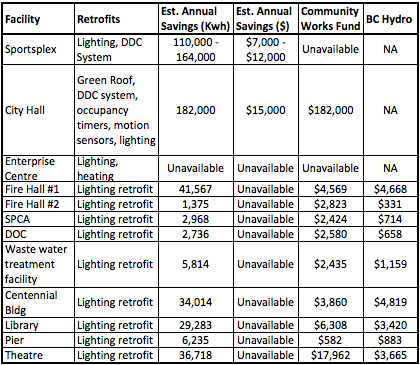 This case study was completed using information obtained through interviews conducted with City of Campbell River Staff and a Municipal Councilor, September 4th-6th 2012. In addition, the following resources were consulted:

4BC Stats; return to text

7Of BC’s 188 municipalities, 180 have signed on to The Climate Action Charter, a voluntary commitment to become carbon neutral by 2012 and encourage development of compact and complete communities. Signatories of the Charter also agree to measure and report on community emissions; return to text

16Since interviews were conducted the Campbell River Mirror has published an article (http://www.campbellrivermirror.com/news/129756413.html), which underscores the energy cost savings resulting from installation of the green roof. This kind of positive press may reverse the negative perception some members of the community have of this and similar projects.; return to text

17Established in 1996, the Investment Agriculture Foundation of BC is an industry-led, not-for-profit organization working to foster growth and innovation across British Columbia's agriculture and agri-food industry (http://www.iafbc.ca/); return to text

18The Community Works Fund is comprised of federal gas tax money, administered by the Union of BC Municipalities; return to text

Winds can become 600 times more powerful
November 7, 2019
The road to become the 1st carbon neutral capital in the World
October 17, 2019
Putting a price on carbon is working! Look at these 6 examples
September 30, 2019
Over 99% of climate scientists have no doubts that humans are causing global warming
August 12, 2019
END_OF_DOCUMENT_TOKEN_TO_BE_REPLACED
Subscribe to