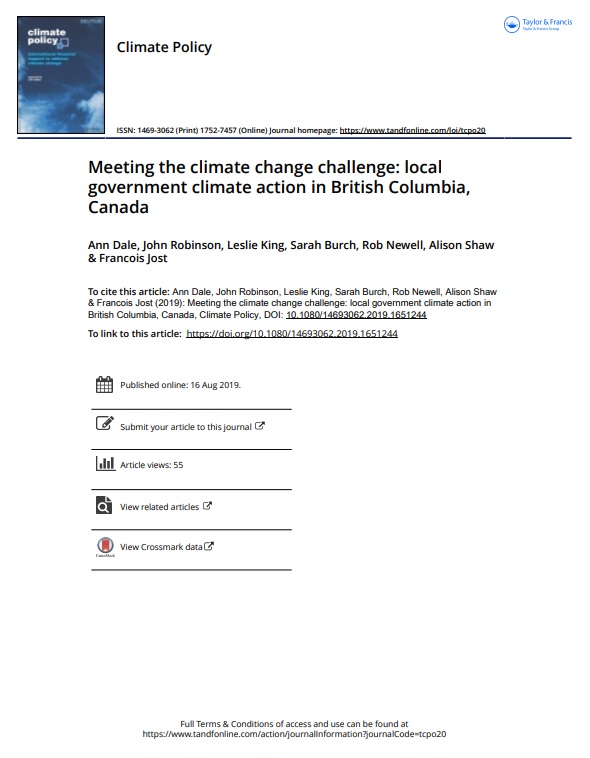 Abstract: Local governments have a key role to play in implementing climate innovations as they have jurisdiction over a significant portion of greenhouse gas emissions. Meeting the Climate Change Challenge (MC3) is the first longitudinal study exploring climate innovation in Canadian municipalities. A tri-university research collaborative, it focuses on British Columbia (BC), whose voluntary efforts to set and meet climate change goals were far more ambitious than those offered by the federal government (and almost any other province in North America at the time). These efforts included introducing a carbon tax and the Climate Action Charter voluntary agreement in 2007. Since then, 187 of the 190 local governments in BC have signed the Charter to take action on climate change. Research in the first phase of MC3explored the dynamics of innovative local responses to the coordinated suite of government legislation, complimentary policy instruments, financial incentives and partnerships with quasi-institutional partners. In the second phase, the 11 original case studies were revisited to explore the nature of transformative change in development paths and indicators of change. Methods include sentiment analysis, decomposition analysis of regional/local emissions, and modelling relationships between climate action co-benefits and trade-offs. This paper provides a synthesis of research outcomes and their implications for environmental governance at multiple scales and the potential of policy innovations to accelerate transformation towards carbon neutral economies.

Abstract: This paper describes the results of a non-computational sentiment analysis of the word ‘change’ on the subject of climate change, local climate innovation and development path change. Results were obtained from interviews conducted with local government officials in 11 communities across British Columbia: Victoria, Vancouver, Prince George, Dawson Creek, North Vancouver, Campbell River, Revelstoke, Surrey, T’Sou-ke First Nation, West Vancouver, and the Kootenay Regional Districts. The sentiment analysis was undertaken to address the lack of agreement among climate researchers and policy-makers over the meaning of change, and to determine whether changes were actually occurring in their development paths. As a result, several drivers and barriers to change were identified at the local government level. Staff quality and horizontal integration were linked to the most positive sentiments, whereas barriers to behavioral change and the limited pace and scale of change were associated with negative sentiments.

Abstract: Engaging in climate action through integrated sustainability strategies can yield benefits for communities in more effective ways than through compartmentalized approaches. Such strategies can result in co-benefits, that is, community benefits that occur from acting on climate change that extend beyond mitigation and adaptation. For example, creating more walkable cities can be a strategy for reducing greenhouse gases, but can also lead to healthier communities. Climate strategies with co-benefits can result in “win-win” situations and thus improve practices for integrated community planning. However, this planning approach also presents challenges because it requires understanding complex relationships between community development practices and identifying synergies. In addition, some co-benefit strategies may also have associated challenges and trade-offs. This research examines climate action co-benefits and trade-offs in order to develop a comprehensive picture of the relationships and potential effects of implementing certain plans and strategies. The research consisted of collecting data on climate action efforts occurring in eleven BC (Canada) communities and coding it to identify climate strategies, co-benefits, challenges, and trade-offs. Relationships between codes were then identified through a coding matrix, and these were used to build a series of models that illustrate co-benefits, challenges, and trade-offs associated with local climate action. Each model centered on a particular area of climate action, including energy innovation, urban densification, mixed-use and downtown revitalization, building stock, ecological capital, trails and transportation, and waste and water. The models provide a holistic impression of the advantages and disadvantages associated with different plans and strategies, which in turn can guide both quantitative analyses and qualitative explorations that contribute toward integrated community planning and decision-making.

Abstract: Decomposition analysis provides a potentially powerful means for analyzing community greenhouse gas emissions data. However, this form of analysis is typically conducted at larger geographical scales (i.e., national and state/provincial levels), which leaves questions around how to apply this methodology to local and regional contexts. This study explores the application of decomposition methodology to community data in order to elucidate how this form of analysis can be employed to inform local/regional planning and climate policy. The research involved developing decomposition models focused on two areas that are particularly important in local climate action - transportation and residential energy. Each model consisted of five factors - population, population distribution, travel (transportation) or energy customer accounts (residential) intensity, vehicle (transportation) or home energy (residential) type, and emissions intensity. Using data from the BC Community Energy Emissions Inventory, the study examined effects of the factors on emissions changes occurring between 2007 and 2012 in the Metro Vancouver Regional District (British Columbia, Canada). Results from the transportation analysis indicated that population growth and people's choices in vehicle type had the effect of increasing emissions in the MVRD, whereas travel and emissions intensity factors had mitigating effects. The residential energy analysis indicated that only population effects led to emissions-increases in the MVRD, whereas the other factors had mitigating effects. Community-scale analyses also were conducted to identify municipalities where emissions-increasing effects were experienced more dramatically, for example, travel intensity effects in smaller communities (e.g., White Rock), energy accounts intensity effects in Vancouver, and emissions intensity effects in the District of North Vancouver. The study demonstrated how decomposition analysis can provide regional and local governments with valuable insight on what is contributing to GHG emissions and where progress was being made, which in turn can help these governments focus climate policy and planning efforts to achieve progress toward mitigation.

Abstract: Despite decades of debate and policy interventions, the wicked social-ecological problem of anthropogenic climate change continues to threaten the sustainability of local communities. Impacts resulting from a rapidly changing climate are now inevitable yet variable in their nature and timing, depending on the extent to which local communities can respond. Transforming to low-carbon communities requires the ability to interrupt the inertia in existing development paths and shift these to more sustainable trajectories. Intervening in local development paths to mitigate climate change requires understanding the multilevel interactions between actors, practices, structures, and ecosystems implicated in system transformations. In this paper we explore the synergies between the multilevel perspective on transitions, social-ecological systems thinking, and social practice theories. We use these to conceptualize an integrative analytical framework capable of assisting researchers and local governments to understand how development path trajectories are sustained, and hence, which local climate initiatives are more likely to change the inertia of current development paths, and which ones only tinker at their edges. 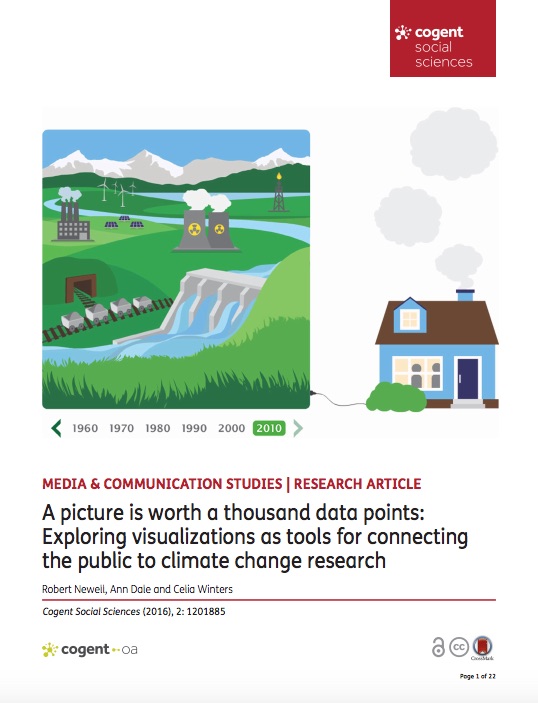 A Picture is Worth a Thousand Data Points: Exploring Visualizations as Tools for Connecting the Public to Climate Change Research
Rob Newell, Ann Dale and Celia Winters (2016)

Abstract: Data visualizations can serve as an integral component of online climate change research dissemination strategies, as they are effective and efficient ways for attracting diverse public audiences and delivering research information in a timely fashion. However, these visualizations can be highly varied in terms of form and ways of interaction, and this raises questions about the particular qualities of such media that influence their ability to connect with and inform diverse audiences. This study addresses these questions by building visualizations of secondary energy production and consumption trends in Canada and evaluating their impact through focus group methodology. Two visualizations were built that held contrasting features: an abstract, static visualization built in the form of a time-series graph and a dynamic, interactive visualization with a ‘picturesque’ design. The results indicate that the interactive visualization held higher potential for drawing in and maintaining audience interests, whereas the static visualization was more useful for users wishing to gain a more detailed understanding of the data. These findings suggest that both types of visualizations have complementary strengths, and collaboration between trans-disciplinary research teams and graphic artists can lead to visualizations that attract diverse audiences and facilitate different information needs and access.

Abstract: This paper explores the role that Internet and online technologies played in research dissemination and knowledge mobilization in a recent climate change research project, MC3. In addition, the team looked at the potential of on-line expert-practitioner research collaborations for these purposes. Electronic communication was seen as a key element for creating distributed networks essential to the project and for building new practitioner/research knowledge collaboratives. The paper discusses how online communication strategies and technologies were used for wide dissemination of its research outcomes. MC3’s research dissemination and knowledge mobilization strategies are analyzed, using engagement as the primary measure, to gain insights on the effectiveness and challenges of using Internet-based tools for communicating climate change innovations and actions.

Abstract: The Canadian province of British Columbia (BC) is taking significant steps towards climate change mitigation, including a carbon tax on fossil fuels and legislation that mandates greenhouse gas (GHG) reductions within public sector organisations and GHG reduction targets for municipalities. This paper carries out a preliminary scan of the GHG emissions of BC communities using the provincially mandated Community Energy and Emissions Inventory reports. We map trends in energy consumption and emissionsper capita while uncovering correlations between these variables and land-use planning, geographic, and demographic variables. These data have shown that: (1) energy consumption in BC is an adequate proxy for GHG emissions; (2) transportation, more than buildings, is a strong driver of overall GHG emissions; (3) building emissions are not likely to be strongly influenced by dwelling type, but density of buildings is crucial; (4) geographic location influences emissions; and (5) population size and age do not appear to influence per capita emissions. These findings are particularly important as they suggest that the potentially intransigent factors of income and population size need not be barriers to achieving significant GHG reductions. The policy onus thus falls squarely on transportation planning, land-use, energy conservation, and fuel switching. This in turn highlights the importance of deeper underlying sociocultural and political preferences, which shape the behaviours that have a strong bearing on emissions profiles.

Abstract: While climate change action plans are becoming more common, it is still unclear whether communities have the capacity, tools, and targets in place to trigger the transformative levels of change required to build fundamentally low-carbon, resilient, healthy communities. Evidence increasingly supports the finding that this transformation is not triggered by climate policy alone, but rather is shaped by a broad array of decisions and practices that are rooted in underlying patterns of development. Even so, these findings have rarely penetrated the domain of practice, which often remains squarely focused on a relatively narrow set of climate-specific policies. This article builds a conceptual framework for understanding the dynamics of community-level development path transformations that may both dramatically reduce GHG emissions and significantly enhance community resilience. This framework illuminates eight critical enablers of innovation on climate change, each of which is illustrated by compelling examples of community-level experimentation on climate change across the province of British Columbia, Canada. It is concluded that community-based climate (or sustainability) policy might be more likely to trigger development path shifts if it employs a longer time horizon, recognition of adaptability and feedbacks, integrated decision making, and systems thinking.

Abstract: In this paper, we examine the synergies and trade-offs between adaptation, mitigation, and sustainability. Our findings suggest that, among leading communities, pursuing an integrated sustainability strategy (rather than a narrow focus on climate change) has the potential to yield benefits for both adaptation and mitigation in the majority of cases. The findings suggest that communities leading on climate innovation in the province have moved beyond a siloed approach in considering mitigation and adaptation. These findings have implications on integrated decision making at the municipal scale and multi-level governance, identifying both the challenges and the benefits inherent in pursuing multiple priorities simultaneously.

Winds can become 600 times more powerful
November 7, 2019
The road to become the 1st carbon neutral capital in the World
October 17, 2019
Putting a price on carbon is working! Look at these 6 examples
September 30, 2019
Over 99% of climate scientists have no doubts that humans are causing global warming
August 12, 2019
END_OF_DOCUMENT_TOKEN_TO_BE_REPLACED
Subscribe to