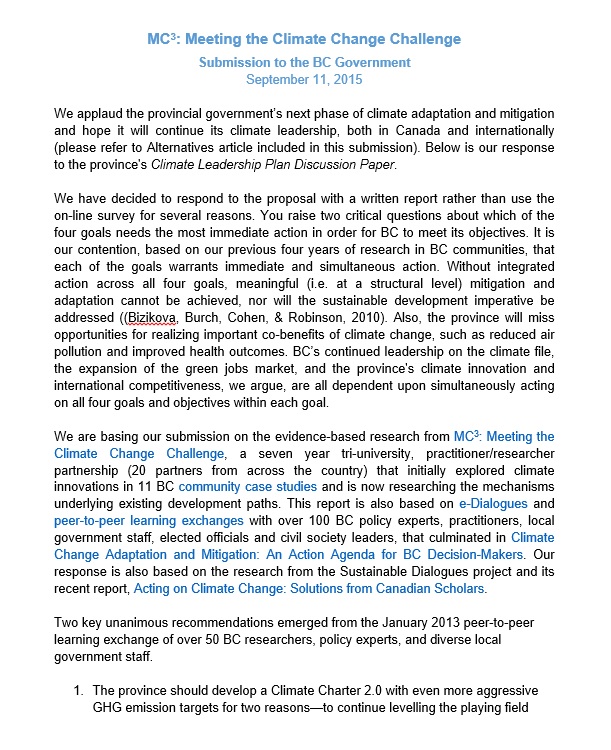 Summary: This report details our response to the province's Climate Leadership Plan Discussion Paper. The Province raises critical questions about which of its climate goals needs the most immediate action in order for BC to meet its objectives. It is our contention, based on our previous years of research in BC communities, that each of the goals warrants immediate and simultaneous action. Without integrated action across all goals, meaningful (i.e. at a structural level) mitigation and adaptation cannot be achieved, nor will the sustainable development imperative be addressed. Also, BC will miss opportunities for realizing important co-benefits of climate change, such as reduced air pollution and improved health outcomes. BC’s continued leadership on the climate file, the expansion of the green jobs market, and the province's climate innovation and international competitiveness, we argue, are all dependent upon simultaneously acting on all goals and objectives within each goal.

Summary: The Province of British Columbia is leading community climate change and sustainability innovation at the local scale. Over the past five years, a suite of provincial government policies and initiatives such as the Climate Action Charter and Bill 27 Green Communities Act have stimulated local governments to undertake innovative climate mitigation and adaptation strategies. Yet, even here in BC there is more to do. This Agenda was derived from research conducted through the MC3 project, including the eleven case studies of communities, online dialogues, and a regional peer-to-peer learning exchange that brought over 40 academics, practitioners, and civil society leaders to discuss the innovations occurring in the province. The Agenda is designed to inform BC decision-makers about next legislative and policy steps necessary for continuing the province’s leadership.

Winds can become 600 times more powerful
November 7, 2019
The road to become the 1st carbon neutral capital in the World
October 17, 2019
Putting a price on carbon is working! Look at these 6 examples
September 30, 2019
Over 99% of climate scientists have no doubts that humans are causing global warming
August 12, 2019
END_OF_DOCUMENT_TOKEN_TO_BE_REPLACED
Subscribe to